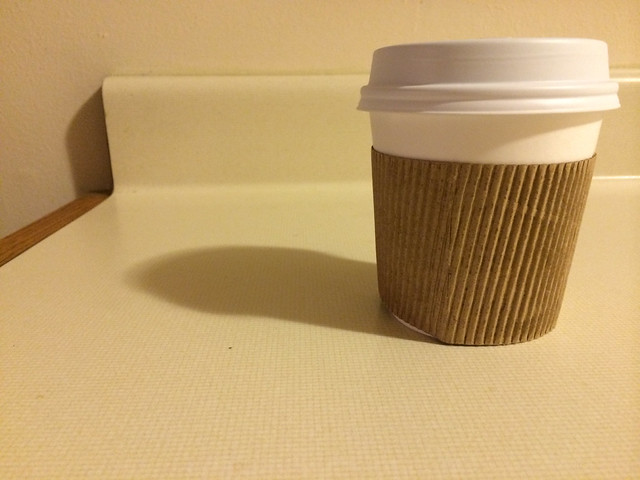 I got into coffee a little later than BBSs, probably sometime in high school due to the fact that my peer group did not have ready access to booze or weed, or seem to be interested in those things. So we drank coffee and hung out at diners. As the years went on, I did develop a taste for coffee, though perhaps not the palate of a world-class barista. These days I primarily use a French press, and then reheat my later mugs. I have found this to be a more acceptable solution to drip coffee, which no matter how good the drip coffee maker, at some point creates burned coffee reminiscent of 7 Eleven. Additionally, the tubes in drip coffee machines have a tendency to get gunked up with mineral deposits and who knows what other things that thrive and spawn in dampness. For my money, a French press makes even a mug of Maxwell House taste like something I paid $2.50 for, and sometimes better than that same $2.50 cup of coffee. Case in point, I am drinking one of those purchased cups now, a cup of medium roast Ethiopian that the server said had a “mild evanescent taste.” Call me a cynic, but my guess is that her manager told her to use the word “evanescent” when describing the taste, because it sounded smart. But the coffee does not have an evanescent taste at all, it has a lingering taste, and I like my French pressed cheap-o coffee better. But I do understand that these places are trying to make a living and have to market their products.

Marketing is probably also at the root of why this same coffee shop had large metal letters spelling out “COFFEE HOUSE” across an entire wall. Seems like a bold statement, but maybe it is a literal and figurative sign of the times. When you walk into a coffee shop the best way to know you have arrived is to be smacked across the face with a 20-foot wall decoration that says so, because let’s face it, people really do not pay attention like they used too.

Lately, you see, I have been reflecting on the days of the BBS, and that time when the world was all a little smaller, a place we were all forced to live in a bit more and pay attention to a little closer in an effort to touch something beyond us. Now things are reversed, the world is everywhere and it is ourselves and our immediate surroundings we have forgotten. While we sit under gargantuan signs stating where we are, we absurdly hunt for ourselves in the glows of our phones and touchable pads, only catching fragmented glimpses of who we were. Everything is everywhere and we are nowhere.

What I think I am trying to say is that I need to drink more coffee.

5 thoughts on “Coffee and the days of BBSing”