END_OF_DOCUMENT_TOKEN_TO_BE_REPLACED

I rewatched RoboCop (1987) with my wife not too long ago. Having grown up with the film and watched it countless times, it’s a film I admittedly have a hard time being objective about. After the fight with ED-209, my wife asked how much of the film was left, and was surprised we had a ways to go. Rightly, she pointed out that the plotting was uneven. This got me to thinking, the film is structured like a video game with 3 different “enemies” or “level bosses”. This isn’t to say the writers, producers, etc. had Castlevania and the ilk on their minds when penning the script, but a quick scan of the video games that came out in 1987 concurrent with the movie would suggest my own experience of it at the time would have not been unlike the games I was playing on Nintendo, Sega, and in the Arcade.

And for what it’s worth, Arrow Video’s reissue of the film is amazing.

I spent about an hour over the weekend trying to figure out the correct terminology for what I now believe to be referred to as a “utility box”. Power box, phone box, or electric box — utility box does cover all those bases. As kids we called it the “green box”, and there was one at the end of the street I grew up on where we’d meet, sit, and hang out.

This is not a utility box you could hang out on, but it is in somewhat dense growth of foliage. 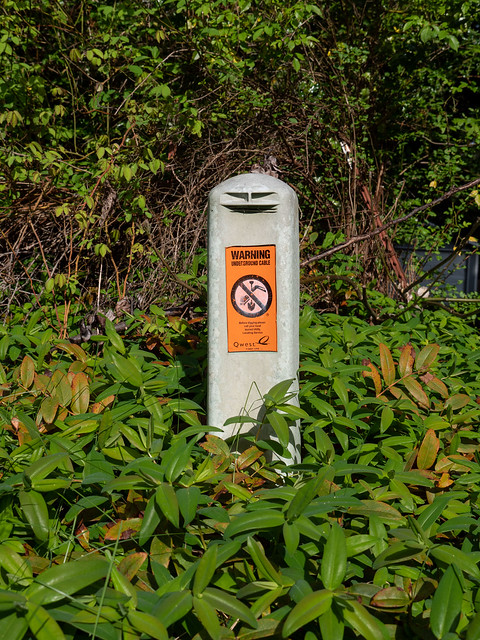 I arrived at this accidentally while I was drawing on an image of a photo I took of the TV. I liked the effect.

Reminds me of an old roommate.

The original was better.